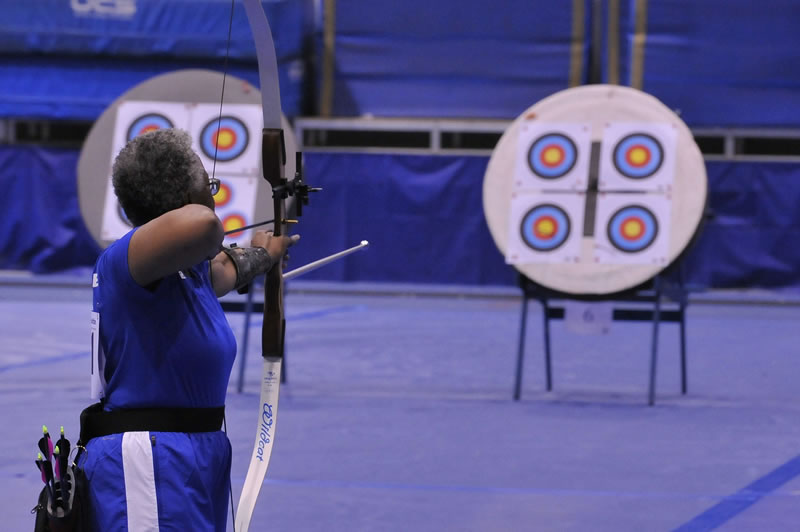 The DWAA (Dorset and Wiltshire Archery Association) hold a number of tournaments (events) throughout the year. All of the outdoor events can be used as a basis of selection for the county team.

Although tournaments tend to have set rules, generally tournaments will be formal in nature if they are considered record status.

With non-record status shoots, rules tend to be more lax and are considered more ‘friendly’.

General features of a DWAA Tournament

Generally on the morning of a shoot it is advised to arrive early. This gives time for registration and if required, inspection of the equipment you wish to use, and to confirm your clothing is within the acceptable range for the competition.

Prior to the competition starting it is normal for the competitors to be brought together and given relevant information for the day.

At the appointed time, archers will be allowed to shoot a number of arrows as “sighters”, after which the tournament starts.

Some competitions (and this is a requirement at record status shoots) have a set interval in which you have to complete your end.

If you have an equipment malfunction you are expected to stand back off the shooting line and to attract a judge’s attention as you may be given extra time in some situations.

Generally changes to scoresheets are not allowed. Depending on the tournament there will be a requirement for scoresheets to be completed in a certain way and any required alterations to involve a judge as soon as the error occurs. Even if the mistake is innocent, with record status shoots it may mean the score is rendered invalid.

For longer events it is normal for a break to be included in the day. With some shoots refreshment facilities are available, but it is advisable to bring your own supplies. For adults participating in tournaments it is worth remembering that the consumption of alcohol is either not recommended or in some situations banned, and can result in an archer being excluded from the competition.

At the end of the competition

When DWAA tournaments have ended, there is normally a quiet period while totals are added and often with tournaments this time is used to present raffle prizes.

Normally shortly after this official results and awards are given.