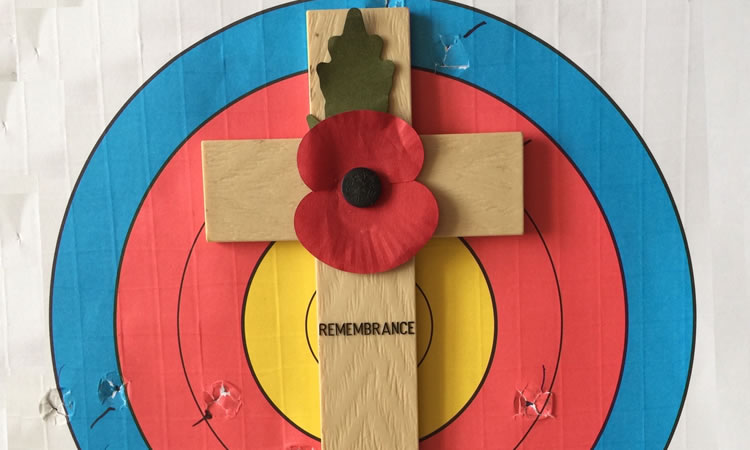 Whilst Remembrance Sunday every November honours those who lost their lives in war it is Armistice Day itself that marks the end of The Great War where in 1918 on the eleventh hour of the eleventh day of the eleventh month when the guns fell silent of which this year 2018 is the centenary.

The outbreak of war on the 4th August 1914 had an impact on archery members and clubs in Great Britain & Northern Ireland both during and after the war.

Whilst volunteers at home such as sportswoman and archer Charlotte “Lottie” Dod – who participated in the archery event at the 1908 Olympic Games in London winning silver who along with her brother William were the first siblings to win Olympic medals – volunteered to help the war effort in the Red Cross (1) those who went to the actual fighting in the trenches or at sea or in the air would have included archers from our two counties.

Whilst the Dorset & Wiltshire Archery Association wasn’t formed until 1954 the following would have been typical of both the archers and clubs in our two Counties such as South Wilts Archery Club and The Wiltshire Society and wider South West region as well the country as a whole at the time during that period;

York Archers say “During and after the First World War, archery in York fell into a decline” (6)

In our own area The Grand Western Archery Society record “51st Dunster (1913) – Salisbury. The War intervened, and although several clubs tried to continue, the larger meetings had to be abandoned. The Archer’s Register ceased with the 1914 edition, and Colonel H. Waldron died in 1917. Two members undertook the business of the Society for the period of the war.” (8)

GWAS also note “Alas, although there was a Meeting in 1914, it was to be the last until 1920. The Society was kept running through the war years by Col Walrond, until his death in 1917, and then by two other archers until the 1920 AGM when a full set of officers was elected.” (9)

The Daily Express newspaper reports “Private William Dod went to war in France, despite being nearly 50. Private Dod won an archery gold medal at the 1908 Olympics. Dod enlisted in the 23rd Royal Fusiliers as a private before transferring to the Royal Navy Air Service as an admin officer.” (10)

The Reigate Priory Bowmen record “That year saw the outbreak of the 1914 – 1918 First World War, which affected archery just as it affected every other aspect of life. The final issue of “The Archer’s Register” came out in 1914 – 1915 in which the editor, Col. Walrond, wrote that several archers and many of their friends and relatives had already fallen in the war. Col. Walrond himself died at the end of 1915 [sic] and “The Archer’s Register” were never again published.” (11)

Lives and sport such as football, cricket and archery in villages, towns and cities would be never be the same again.

So, let us not forget all that we owe to those Ladies and Gentlemen who throughout First World War – whether on the front line or at home front – and since have sacrificed to make our continuing enjoyment of our chosen sport possible. We shall remember them.