Toxophilites in the West Country 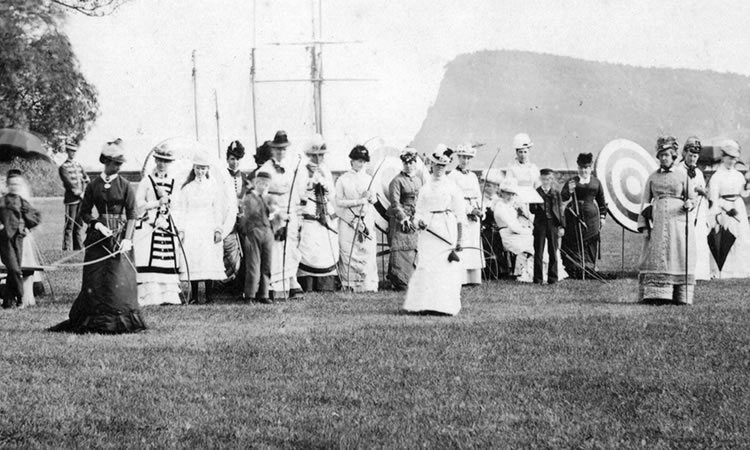 Prowess with longbow and arrow has long featured in British history (Crecy and Agincourt) and popular culture (Robin Hood, Maid Marion and Ivanhoe). Compulsory practice was required for every boy from the age of seven until technological developments during the 16th and 17th centuries replaced the longbow as a weapon of war, transforming its use to one of social enjoyment in the form of archery clubs. These clubs were initially dominated by the aristocracy who combined a nostalgic taste for the gothic and medieval with conviviality and social exclusivity – the Toxophilite Society was formed in 1781 and combined archery with considerable eating and drinking. On the accession of Queen Victoria, women were increasingly able to join these societies, allowing men and women to compete side by side, thereby offering the unintended opportunity for the young to meet prospective partners in a relaxed environment. The urban middle classes, increasingly adopted the sport of archery and early references to archery in the West Country include the Sarum Archers (1791), an Archery Fete at Stalbridge Park (1836), the first meeting between Cornwall and Devon at Teignmouth (1852) and the formation at Sherborne of the Blackmore Vale Archery Club (1869).

The Yeovil Archery Club was founded in 1857 and bow meetings were held in the attractive grounds of Bragg Church, Hendford courtesy of Frederick Greenham (1802-1877), glove manufacturer, mayor and magistrate (see A-Z of Yeovil’s History, Bob Osborn). A newspaper report of the meeting in July 1859 records the following recurring features at archery meetings: public display and ceremony in a picturesque rural setting, separate competitions for men and women, attendance by the elite of the neighbourhood, music provided by a band, a recherché dejeuner supplied by the Choughs Hotel and the day culminating with a ball.

The Grand Western Archery Society (open to the archers of Cornwall, Devon, Dorset, Somerset and Wiltshire) held their first meeting at Taunton in 1861 and Sherborne hosted meetings in 1872, 1880, 1893, 1908 and 1933. Winners of the 1908 competition, Miss K.G. Mudge and Mr R. Brooks-King (the champion on 17 occasions), are illustrated. The three day meetings were held on the Sherborne School cricket field, by kind permission of the Headmaster, except for 1880, when it was held at Sherborne Castle, courtesy of Mr G. Wingfield Digby. Arrangements were made by Jocelyn Ffooks and Thomas Dodington. Competitors stayed at the Digby, Antelope and Half Moon Hotels, Melbourne House and in private accommodation. 17 pairs of targets were erected in front of the castle with the ladies loosing 48 arrows each day at 60 yards and 24 at 50 yards and the gentlemen: 72 arrows at 100 yards, 48 at 80 yards and 24 at 60 yards.  Marquees provided refreshments, cloakrooms and scoring facilities, with Mr Binnie-Clark supplying table d’hote breakfast and dinner at the Digby Hotel. The Sherborne Military Band played during the day and William Chaffin photographed the attending social elite. A ball was held at the Digby with music provided by Mr Targett’s Quadrille Band. Prizes were presented during the evening by Lady Theodora Guest (the Lady Paramount – a ceremonial appointment). Handicap prizes were shot for on Friday. The GWAS still prospers, organising 50 annual, regional tournaments, including an archery week at Dunster.

The appeal of the longbow in its historic, rural, picturesque and elegant settings provided not only symbolic significance for its participants but also combined mixed socialising within a competitive framework.